Referral service a win for homeowners 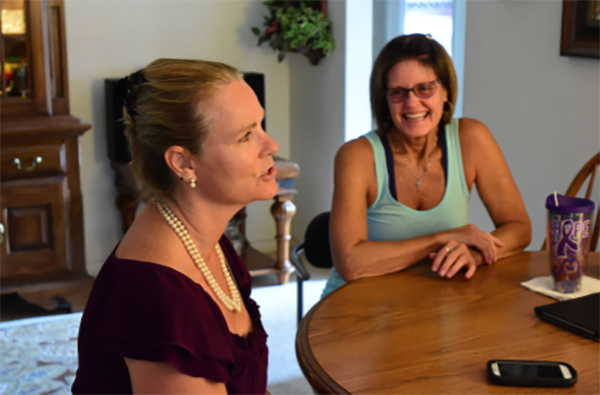 But they are not.

Eisele, 52, and Thomas, 59, met earlier this year when a housing program called Home Share Pinellas brought them together. The Tarpon Springs-based agency is among dozens of such nonprofit housing organizations in the United States and abroad that pair financially unstable or lonely homeowners with indigent renters.

“Home Share is great for many reasons,” Thomas said. “But especially because it pays attention to fine details and finds a compatible match.”

Wanda Weber took over Home Share in January 2012, just before its first director, Sandy Herskowitz, retired. Herskowitz, who died in March, took control of the agency when the Tarpon Springs Housing Authority established it in 2006.

In 2010, the agency began collaborating with the Pinellas County Housing Authority in an effort to extend its reach. Yet it remains Florida’s lone Home Share, and it only serves Pinellas County.

Based on income, the renter pays between $450 and $600, including utilities. And the parties agree to a month-to-month lease, which can be severed by either one.

“We really love what we do,” Wanda Weber said.

People interested in using the service submit applications. After an intensive background check, Weber either begins mediating interviews between the provider and renter or, in the case of a felon, refers the person to another agency. The entire process is free for the client.

Home Share is not an emergency housing program, Weber said. It is a long-term arrangement.

“Now they can take a breath and relax; they’re both stable,” Weber said about making a match. “The quality of life changes for both.”

Eisele bought her Clearwater home in 1996 and has spent most of the past five years alone. After her daughter, Kristen, 29, moved out, Eisele said she did not want a roommate.

“I had some good ones and I had some bad ones,” Eisele said. “I said for a long time after I got out of college, ‘I’ll go without food before I get a roommate again.’”

That changed late last year, Eisele said, when a friend stayed with her for a few months and told her about Home Share.

“I’m getting closer to retirement,” Eisele said. “I want to get some debts paid off, and I like having someone here.”

Thomas learned about the agency last October after arthritis and a bad hip forced her to sell her home in Clearwater’s Green Briar neighborhood because she no longer could maintain it.

Between stays at a friend’s house in Florida and her brother’s in her hometown of Pittsburgh, Thomas learned about Home Share and submitted an application.

Eisele’s and Thomas’ paths coalesced in February when Weber mediated an interview at Eisele’s 1400-square-foot home on Lakewood Drive, just south of where Thomas used to live. It was their first face-to-face meeting. Eisele had her reservations going into it, while Thomas’ came afterward.

“I was a little hesitant when I talked to her on the phone, and she told me she had this issue with the arthritis and the hip replacement,” Thomas said. “But then when I met her, she seemed so nice and bubbly.”

The admiration was reciprocated.

“She was very nice; very kind,” Thomas said. “She was professional. She was sweet. She was honest.”

Yet, Thomas said she had one problem with the three-bedroom, two-bathroom house: The wall-to-wall end tables in her potential bedroom.

Thomas said she called Eisele around 10 p.m. that night to ask if the clutter could be removed.

Despite disparate tastes in music, sports and interior design, Eisele and Thomas have formed a bond in their four months together.

Some of the women’s tastes even have begun to rub off on their housemate.

“Angie and I have totally different tastes in decorating,” Thomas said. Thomas is “totally contemporary,” she said, while Eisele is “totally country.”

Eisele said she prefers most of the changes.

Last Sunday, Eisele and Thomas took a Rays bus to the Rays vs. Red Sox game. The $50 ticket package included a hat, drinks, food and the transport.

“Unfortunately they only had beer on that bus,“ Thomas said. “I don’t like beer.”

Regardless of the beverage selection, Thomas, a hockey fan, said she had a great time.

Eisele and Thomas share a few life experiences, too. Each has been married — Eisele twice; Thomas once — and each has a grown daughter, and a grandchild. Eisele’s granddaughter, Lauryn, turns 1 in April. Thomas’ grandson, Jordan, is 6.

Shortly after 5 p.m. when Eisele gets home from her job at Bouchard Insurance, she is greeted by Trip, a three-legged Jack Russell Terrier, and Carlos, a mini doberman pinscher, and she begins making dinner. Thomas does not cook a lot, but she always cleans up afterward.

From there, they talk or watch television.

Eisele and Thomas do not spend all their free time together, but their relationship transcends that of typical roommates.

“Our goal is to make a good match that becomes a friendship,” Weber said.

In the pairing of Eisele and Thomas, Home Share appears to have succeeded.